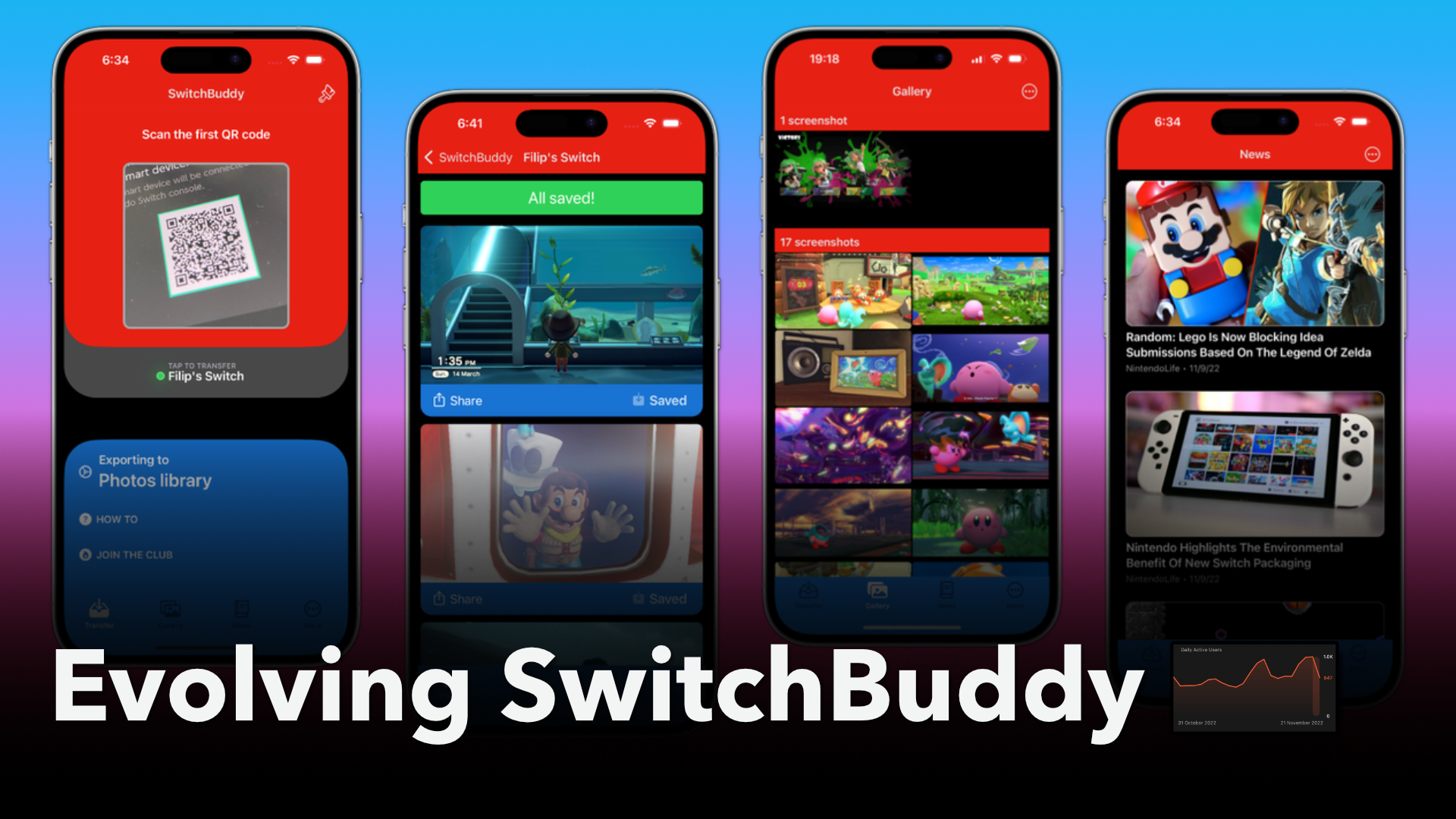 This new blog series is my attempt to chronicle the evolution of my SwitchBuddy app from a simple tool to a more all-around companion for Nintendo Switch gamers.

SwitchBuddy is currently over a year old. I created it because transferring screenshots and videos from Nintendo Switch is quite cumbersome - assuming you want to move to your mobile device. So initially, the app was just a convenient way to export these game captures, and that was it. I added a few cool features like zooming the scanning interface for people playing on their TV and themes inspired by the Joy-Con colors (these are the small controllers for Switch).

I shared a bit about SwitchBuddy in the Indie Dev Monday newsletter closely after the initial release.

As of writing this, I have recently released SwitchBuddy 2.0, which officially started the “transition” to being a more all-around companion for Switch. The main drive behind this was the popularity of the app. Some months ago, I added analytics (TelemetryDeck) and discovered that SwitchBuddy has hundreds of daily active users. Much more than my other apps. So with my friend who develops the Android version, we brainstormed a bit over lunch and decided to make the app bigger. This meant surfacing the gallery (which has all the exported media) and adding a News feed. 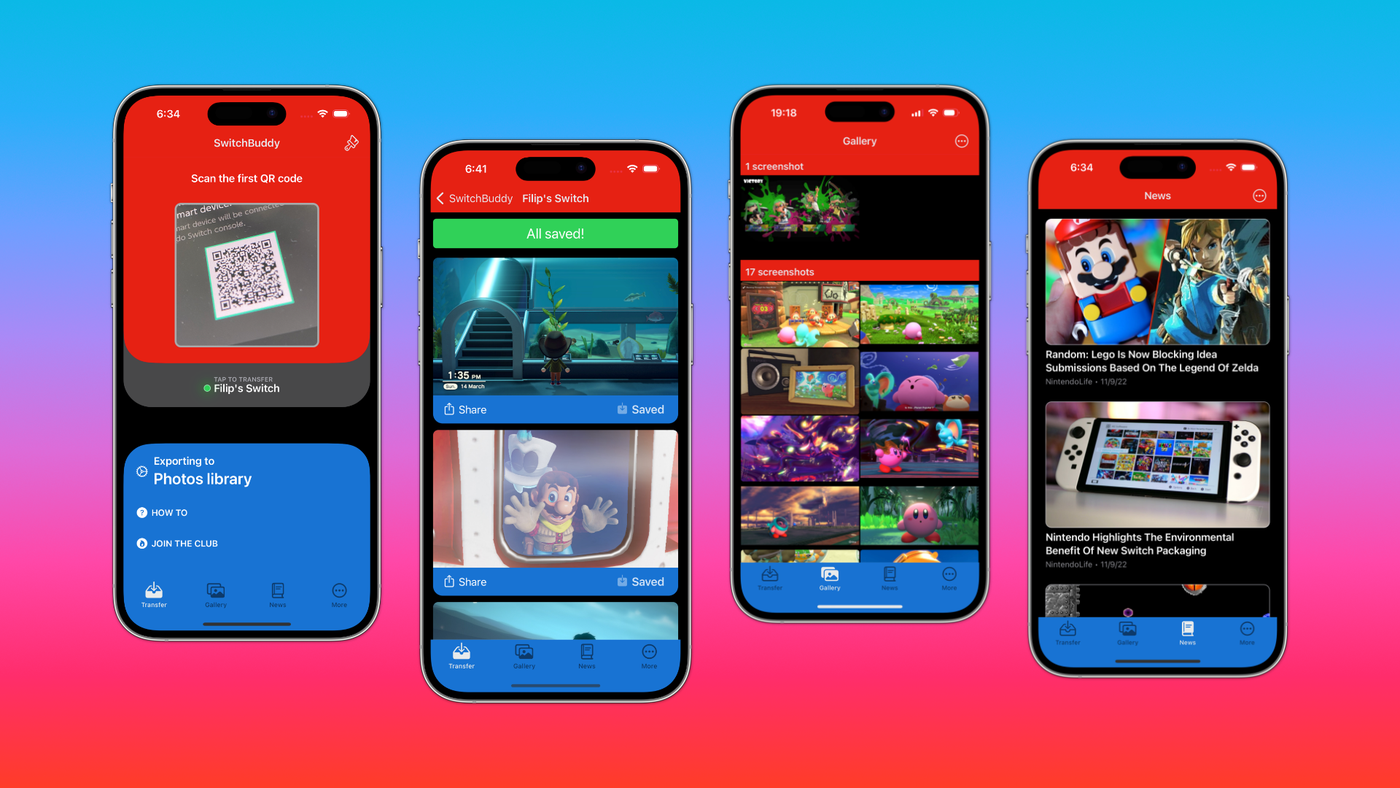 Building this simple API took a few hours, thanks to my experience with indexing RSS feeds for the iOS Feeds project. And voila, I could develop a brand new feature for the app.

The primary motivation behind evolving SwitchBuddy is to work on something popular and have fun. I want to introduce optional subscriptions for extras like more themes, custom app icons, and similar. I don’t expect this to turn into a significant revenue source, but I want to experiment on my own (I have already developed subscription apps in my day job).

SwitchBuddy has Tip Jar, which gets some tips, I was also surprised to get a few 20$ ones which is the highest tier, but the app made less in the last few months than my document scanner Scan it, which used to be paid and now has single in-app unlock to remove the limit on the number of scans. Keep in mind that SwitchBuddy has like 100x daily downloads of Scan it.

Also, the app just recently crossed 1000 daily active users (it always peaks over the weekend), which was another motivation to continue developing it further. 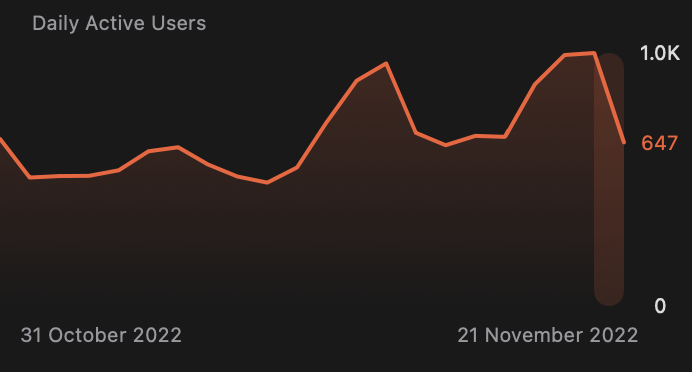 I have discovered an API that lists upcoming games, and I plan to surface the ones for Switch in the app. In the initial version, this will likely be a simple list with a limited detail view. I want to have countdown widgets for releases - this is one of the features I intend to put behind the subscription.

I will extend my existing API to fetch data from this 3rd party one to save us development time. It will be much easier to call our API in the app than the 3rd party one and deal with authorization. I will also be able to edit or add games manually.

Evolving SwitchBuddy: How hard can it be?

Turns out, dealing with release dates isn’t a walk in the park.

When looking back at the past months, there are a few things I wish I would do differently.